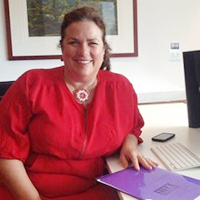 Published last month, the sixth update of the Cochrane Review on Psychosocial interventions for supporting women to stop smoking in pregnancy weighs up the evidence on a critical health and social equity issue. Smoking remains one of the few preventable factors associated with complications in pregnancy, and has serious long-term implications for women and babies. While the number of women smoking in pregnancy is decreasing in high-income countries, where it’s associated with poverty, it’s increasing in low- to middle-income countries.

‘This is now one of the largest reviews in the Cochrane Library,’ explains review author Dr Catherine Chamberlain, who has worked on each update of the review since 2003. ‘It includes 102 randomised controlled trials involving almost 30,000 women. Three of these were conducted among Indigenous communities (in Australia, Canada and New Zealand), and nine were conducted here in Australia. Smoking during pregnancy is three times more prevalent among Aboriginal and Torres Strait Islander women than among non-Aboriginal women, so we need to look closely at what kinds of interventions can support Indigenous women.’

In this latest update, Catherine and colleagues set out to identify and compare the effectiveness of a range of psychosocial interventions that aim to support pregnant women to stop smoking, including counselling, health education, feedback, social support, incentives and exercise. They found counselling, feedback and financial incentives appear to reduce the number of women smoking in late pregnancy. The effect of health education and social support was less clear.

‘Overall we found that psychosocial interventions increased the proportion of women who had stopped smoking in late pregnancy by 35% and also increased mean infant birthweight by 56 grams. The number of babies born with low birthweight was reduced by 17% and the number admitted to neonatal intensive care immediately after birth by 22%. However, as we note in the review, most of the studies were carried out in high-income countries, making it difficult to assess if the findings are applicable to many other contexts.’

Importantly, the review finds that the interventions don’t appear to have any overall negative physical or psychological effects, are positively received by most women, and may improve psychological well-being. But as the review highlights, the findings need to be considered carefully and in the context of many complex psychological, socio-economic and environmental factors and risks.

‘Interventions should incorporate strategies to reduce the risks we identified in this review, including stigmatisation and depicting mothers who smoke as 'harming' their babies. We know that some anti-smoking campaigns aim to shock or shame people into quitting and don’t necessarily take into account low self-esteem, low self-efficacy, poverty, stress and increased caring responsibilities that are common among women who continue to smoke during pregnancy. It’s important that psychosocial interventions don’t undermine women’s self-confidence or leave them with a sense of failure.’

To add to this complexity, some psychosocial interventions such as incentives are seen as contentious. Incentive-based interventions see women receive a financial incentive in the form of shopping vouchers (and in one study lottery tickets) contingent on their stopping smoking. Incentives are offered in conjunction with feedback interventions, where information is provided to the mother about the measurement of by-products of smoking (such as carbon monoxide or urine cotinine measurements.

‘Some of the evidence we are seeing suggests incentives can be effective, but there are a whole lot of issues around what’s seen as ‘paying people not to smoke’’, says Catherine. ‘There’s been a mixed response to the concept of incentives both here and in the UK, but I think they are really interesting in terms of using positive reinforcement rather than more punitive approaches. People in low income groups often have low self-confidence and low self-efficacy so you need to balance risk messages with positive support. We’ve had a lot of contact with the people who run incentives trials and they do seem to have been highly effective when delivered intensively, even for high risk pregnant women attending drug dependency units. Incentives have the potential to reduce inequalities and support women in practical ways and that’s encouraging. So despite the controversy, we do need to do some careful thinking and analysis around this, and look clearly at the evidence for what works for different women. Nicotine replacement therapy appears to have a small effect and most people would support subsidies for these. Yet there seems to be barriers for paying similar amounts for incentives which seem to be much more effective. There are also the added benefits of funding going directly to predominantly poor pregnant women, and the pilot evidence shows these funds are spent on useful household goods such as a washing machine or fridge.  Ultimately we really need to look at and understand which psychosocial interventions work for different women and why.’

Catherine heads to the UK next month to further the aims and understanding of this review through an Endeavour Award funded by the Australian Government, the NHMRC and the Judith Lumley Centre at La Trobe University. Based with Professor James Thomas at the Evidence for Policy and Practice Centre at University College London, Catherine will meet with colleagues from the Cochrane Pregnancy and Childbirth Group, the UK Tobacco Control Centre and Dundee and Stirling Universities to discuss and analyse both the quantitative and qualitative aspects of this important research.