There are many reasons to undertake a Cochrane review. For the author team behind the new review on safe and effective approaches to stopping antidepressants, the motivating factors were both personal and professional, national and international.

'Long-term antidepressant use is on the rise around the world and all of us recognise the urgent need for evidence on safe and effective approaches for people who want to stop taking them,’ says Mieke van Driel, Emeritus Professor of General Practice at the University of Queensland. ‘As a GP myself, I see first-hand the struggles many patients have coming off antidepressants, yet we don’t know enough about how to reduce inappropriate long-term use or what the safest and most effective approaches are to help people do this.'

'Our latest Cochrane Common Mental Disorders review confirms that while much is known about the increasing global uptake of antidepressant medications, there’s little high quality evidence on safe and effective approaches to stopping treatment. For example, there are over 1,000 studies looking at starting antidepressants, yet we found only 33 randomised controlled trials (RCTs) around the world that examined stopping them. It’s clear that this area needs urgent attention.’

Over three million (or 1 in 7) Australian adults take antidepressants for depression and anxiety every day, making Australia the second highest consumer of antidepressants of all OECD countries. In 2019, there were 27 million prescriptions provided for antidepressants across Australia, with around 86% of those written by GPs. The average duration of treatment is four years. Guidelines typically recommend that antidepressants be taken up to 6–12 months after improvement, or for up to 2 years in people at risk of relapse, but many people take antidepressants for much longer. Surveys of antidepressant users suggest that 30–50% of long-term antidepressant prescriptions have no evidence-based or clear medical reason to keep taking them. Long-term use can put people at risk of adverse events such as sleep disturbance, weight gain, sexual dysfunction, low blood sodium and gastrointestinal effects (eg diarrhoea, constipation), as well as feeling emotionally numb and unable to deal with problems in life without medication.

Mieke and the international author team looked at the findings from 33 RCTs that included 4,995 participants who were prescribed antidepressants for 24 weeks or longer. In 13 studies, the antidepressant was stopped abruptly; in 18, it was stopped over a few weeks (known as ‘tapering’); in four, psychological therapy support was also offered; and in one study, stopping was prompted by a letter to GPs with guidance on tapering. Most tapering schemes lasted four weeks or less and none of the studies used very slow tapering schemes beyond a few weeks - in contrast to new guidelines from the UK Royal College of Psychiatrists that recommend tapering over months or years to safely stop.

‘For me, this is such a critical issue, from both a personal and a professional perspective,’ says London-based Australian Cochrane author Dr Mark Horowitz. ‘I am one of the hundreds of thousands of people who have experienced long, difficult and harrowing battles coming off long-term antidepressants because of the severity of the withdrawal effects. And rather than being able to find or access any high-quality evidence for guidance in this situation, I instead found that the most useful information was on peer support sites where people who had gone through withdrawal from antidepressants have been forced to try to become lay experts themselves. This lack of evidence in such a critical area is just not good enough, and is one of the main reasons I got involved with this Cochrane review. For me coming off antidepressants, though a difficult process, has been transformative – having improved the tiredness, issues with memory and concentration that I had long thought were due to other conditions. I want other people to have the option to come off antidepressants without the same trouble I have had.’

‘We compared different approaches and looked at benefits (such as successful stopping rates) and harms (such as return of the depressive or anxiety episodes, side effects and withdrawal symptoms). We outline detailed findings across all these areas, but in a nutshell there was only very low certainty evidence on the pros and cons of each of the different approaches to stopping – making it difficult to reach any firm conclusions at this time. The key issue is that studies do not distinguish between symptoms of a return (or relapse) of depression and symptoms of withdrawal after stopping, and that’s just so problematic.’

‘The difficulty of distinguishing between withdrawal symptoms and relapse presents a real challenge for patients, doctors and researchers alike - often resulting in inappropriate continuation of antidepressant medication and uncertain evidence on which to base healthcare decisions. For example, in studies where antidepressants are stopped, withdrawal symptoms such as insomnia, low mood, anxiety and changes to appetite register on the questionnaires used to detect a return of the patient’s anxiety or depression. This might make it look like more people are having a return of their anxiety or depression than is really the case.’

‘To address this critical issue and provide the evidence we need, future studies need to distinguish carefully between withdrawal symptoms and relapse, and try using taper schemes of many weeks or months (or longer for long-term users) down to very low doses before stopping. These kinds of studies would give us a clearer idea if we can safely discontinue antidepressants without triggering a relapse.'

‘Ultimately we really need more studies about discontinuing antidepressants – especially in primary care given that’s where most prescribing takes place – before we can make more definitive conclusions. In the meantime, we hope this review provides a starting point to help GPs openly discuss continuing or stopping antidepressants with their patients. We also want to raise awareness that withdrawal symptoms from antidepressants are common and can be mistaken for relapse of the underlying condition. Experiencing withdrawal symptoms isn’t a sign that the patient has relapsed – it might be that they need to taper more gradually down to much lower doses instead, before eventually stopping.’

‘Looking ahead, we await the results of current studies underway that are looking at discontinuing antidepressants,’ Mark adds. ‘Studies like the REDUCE trial in the UK, led by our review’s co-author Prof Tony Kendrick, which is testing online and psychologist telephone support for patients withdrawing from long-term antidepressants where this is appropriate, and the WiserAD trial of nurse-led support led by Prof Jane Gunn at the University of Melbourne. We know future studies will be critical in addressing the urgent need for more and better evidence, given the concerning trend of long-term use of antidepressants here in Australia and around the world.’

Antidepressants in Australia: a snapshot 2021

Download a PDF of this infographic here... or view each slide below 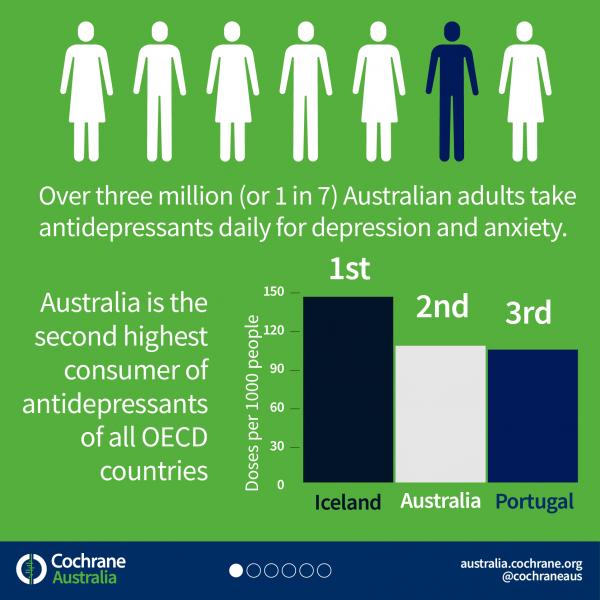 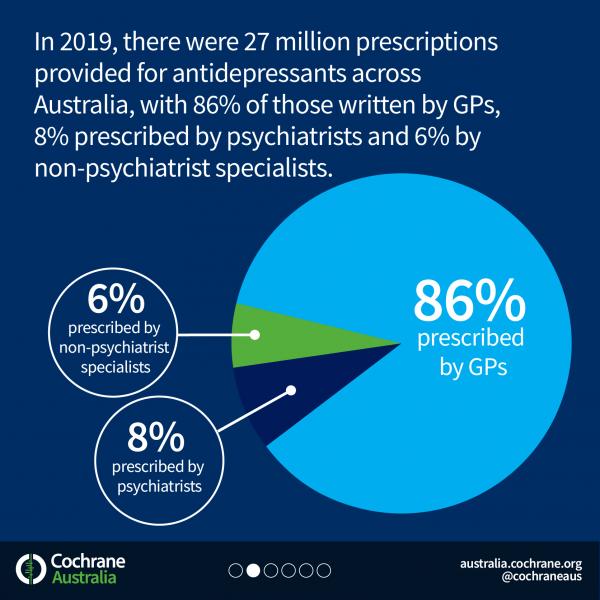 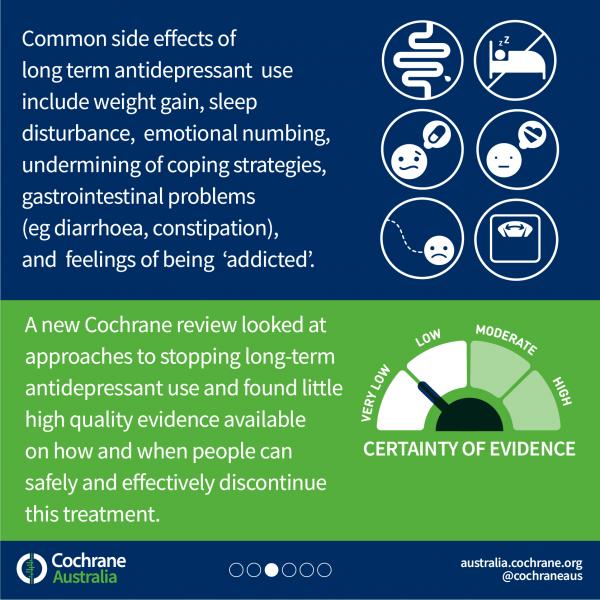 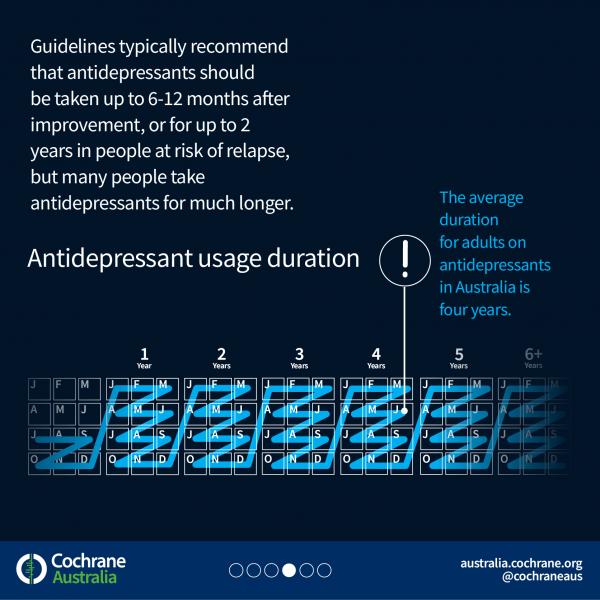 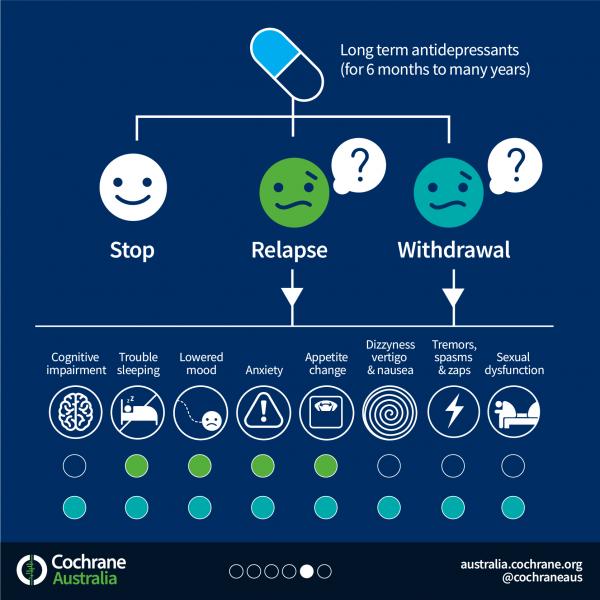 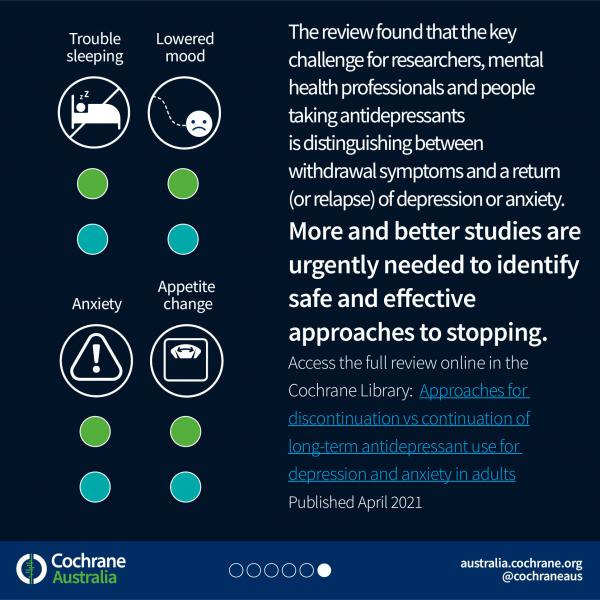