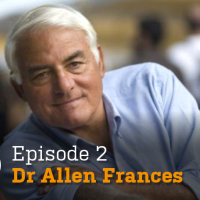 On episode 2 of The Recommended Dose, leading US psychiatrist Dr Allen Frances warned of the increasing dangers of  over-medicalisation and overdiagnosis in Australia and around the world, saying ‘people are way too frightened of disease, and way too little frightened of the treatments for disease.’

Described as one of world's most prominent psychiatrists, Dr Allen Frances recently made headlines for the controversial claim that 'Donald Trump isn't mad, we are'. In a new episode of Australian podcast The Recommended Dose with Ray Moynihan, he shares the thinking behind this now infamous statement and goes on to look at the increasingly critical area of overdiagnosis and labelling of everyday life experiences such as grief and loss as mental illness.

In recent years, Allen Frances headed the Taskforce which wrote the 4th edition of the influential psychiatric manual of mental disorders, the DSM. But now, he's become one of its loudest critics. ‘We're taking every day experiences that are part of the human condition and we're overdiagnosing them as mental disorders, and way too often providing a pill when there's not really a pill solution for every problem in life,’ Dr Frances says.

In the interview, Allen Frances also talks candidly about the time when he was the recipient of pharmaceutical company generosity - explaining his feeling now of regret and cautioning young doctors to avoid all financial ties with the industry.

And in an analogy that will resonate in Australia - where property is something of a national pre-occupation - he cautions that taking ongoing medication is as serious a decision as buying a house.

‘You wouldn't go and buy your house after a 10 minute evaluation,’ says Dr Frances. ‘People should be as careful about accepting or giving diagnoses and as careful about considering medication as they would be for a major life decision.'

Dr Frances also highlights the increasing rates of ADHD diagnoses and the medicalisation of children and young people as a critical area in need of urgent attention.

'I think we're doing a massive worldwide experiment on immature brains, bombarding them with very powerful chemicals without any knowledge whatever about what the long term outcome will be and without informed consent.’

Listen to the full interview on The Recommended Dose - now available on SoundCloud. Available on iTunes and Stitcher from Thursday 26 October.

You can also hear The BMJ's Editor-in-Chief Fiona Godlee in conversation with Ray on episode one, talking about the need for much greater independence between doctors and drug companies, and sharing some intimate details about what drives this extraordinary woman.